Yes, I am still kicking... not blogging much, but sewing, quilting and kicking!  This blog is mainly for the swap (so sorry, it's closed already!)  But you might find interesting things in my ramblings. 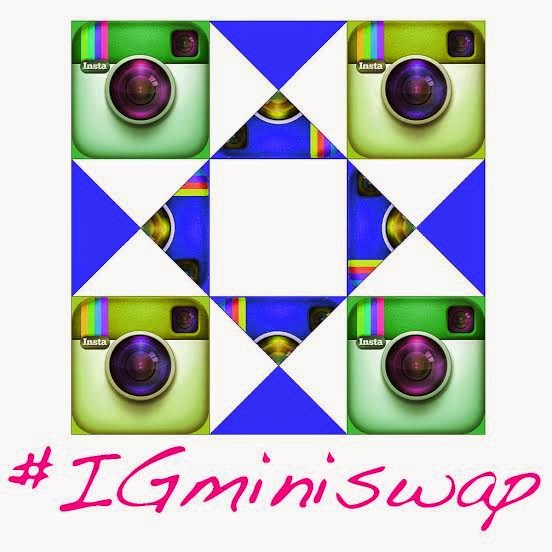 My friend, Sandy aka CurlyBoy (who I met on a Doll Quilt Swap on Flickr) is having a massive mini quilt swap on Instagram.  I think IG swaps are a fairly new concept.  This is my first online swap in about a million days.
I don't have a Flickr account anymore, so I will attempt to link all of the source of each of these images next.  Some are simply pictures, and some have tutorials.:

I have been sitting with a knee injury.  When bored, I pin at Pinterest.  I have a bazillion quilts pinned in a dozen different quilting folders.  There's also lots of stritchery, art, Zentangles, food and wedding stuff (It's exactly TWO months until DD Meredith gets married!)

So, WATCH OUT!  Don't hop to Pinterest unless you have time to swoon and drool, LOL!

Partner, I put together this folder specifically for the IG Swap.  In a nutshell, I love low-volume, text fabric backgrounds, solid fabrics and other rainbow and bright colors, presented in a highly graphic or linear design.  I'm still crushing on the big clam shell quilts, anything with text prints and I do love me some improv too!

I am excited thinking about this swap process!
Posted by teri at 10:51 PM 11 comments:

ALL SHIRTS! (no shoes) Have you seen Carolyn Friedlander's new shirtie pattern? This is a swap for those!

Hurry over to May Chappell/Lee's for full details and for the giveaway--you must enter today! But sign on at the Flickr group soon too!

As Lee said, "I’m off to make shirts! This is going to be epic!"

In other news, Meredith is engaged and getting married next year!
Oh, and HAPPY THANKSGIVING!

A Tale of a Featherweight

Bloggers, forgive me for I am remiss... it has been two months since I last blogged!  I feel like the worst blogger ever, but keep reading of others in the same boat.  It's probably the instant gratification of Instagram that has us all starry-eyed and not practicing our blog-writing skillZ!  I digress... 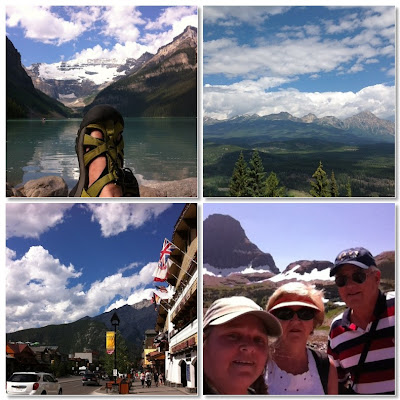 This story began with Colleen and her family vacation across the northern US and southern Canada.  She had a great time and posted a lot of pics.  I missed the one where she mentioned a white/mint Featherweight she had seen...

...Until our guild's last Sit 'n Sew.  Colleen was telling me about her trip when the Featherweight came up.

"What's the name of the store?"

Lavoy's Antiques in Alberta, British Columbia.  Just at the talk of the little beauty, I could feel my heart race.  Later I told Byron about the machine and googled to find out more about the store.

On Monday, I called.  The lady said I was her furthest inquirer about a machine.  She asked me if I found her on Google.  I told her the story.  She sent me to the Kajiji listing for it (Canadian version of Craig's List) and gave me the machine specs.  I told her I would call her back to let her know something and to please hold it in the meantime.

That was when I googled 'SINGER FEATHERWEIGHT WHITE.'  I could feel my heart pounding again.  Should I buy it with only Colleen's impression and a few not-so-good net pics?  Was it worth the cost?  Did those watermark lines on the box mean it had sat in water?  Was it rusted?

The price was pretty good. 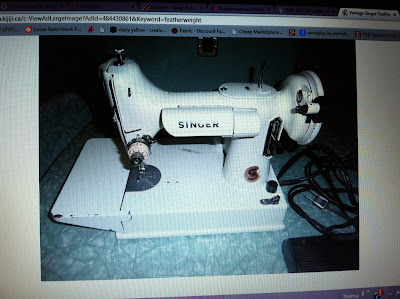 I studied the limited images on Kajiji pics.  The cord was bound all over with electrical tape.  I learned that the original machine came with this charming Bakelite box full of accessories and that it had originally had a white drive belt.

A half hour later, I called her back and continued to question.  I pointed out the things that I saw were missing (largely, they were extras, not essentials.) I asked her if they would pay the shipping and leave it at the same price.  She had to ask her husband, but he agreed.  I was a little upset that they accepted so quickly and didn't haggle... maybe I had offered too high?

So, we made the transaction and the wait began.  My Canadian friend, Katy and I joke about the 'black hole' between the US and Canada border.  When something goes in/over,  you never know when it's going to 'come out' on the other side.  It might be a week or it could be closer to a month!  I was determined not to mark the time closely so I wouldn't be anxious. 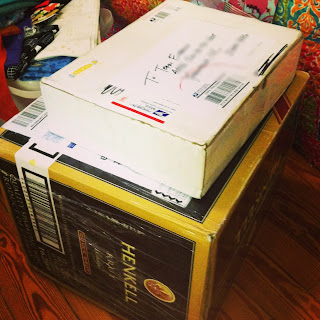 The electronic receipt came in my email.  Then, in what seemed like no time (less than a week) the mail lady was blowing her horn in my driveway (that's rural for "You've got BIG mail!")  Byron brought the whiskey box it was packed in inside.  I spent a while looking her over and seeing if I saw any obvious problems.  The cord was pretty beat up so I was afraid to plug it in.
Yesterday, we took her to to the Poppy Featherweight guy who repairs machines at quilt shows.  He gave her a check, at a screw or two and suggested replacing the cord.  But other than that, she's good to go.  YAY!  I made a good investment! 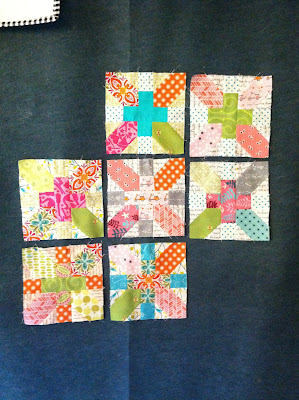 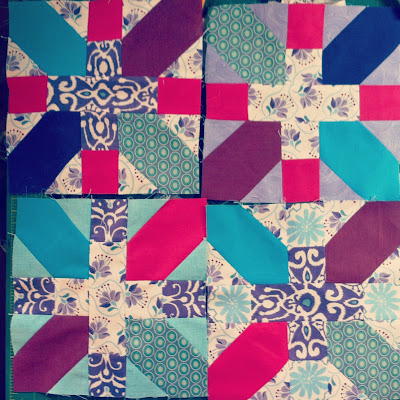 blocks for a special secret project

Hi! Although I am not being truly held hostage, I thought I would pop in as a proof of life, LOL! It's summer and life is crazy, ain't it?

As our service project, our local modern quilt guild makes wheelchair quilts for seniors. Wheelchair quilts, are roughly the size of a baby quilt--not so big that they get tangled up in the wheels.  I make mine 36"x36" which takes slightly over a yard of fabric to back.  That's also nine 12" blocks, which is like a giant nine-patch.

I have made several of these quilts, but had yet to successfully quilt one on my plain little Singer 221 Featherweight.  It's a vintage machine that sews only straight stitches and the feed dogs cannot be lowered.
Sounds like a straight-stitched quilt, right? Usually, the feed dogs pull and the fabric puckers.  It just looks bad, so I give up.

A bundle of batik big 10" charm squares arrived in the mail yesterday. What in the world I was going to do with more swap square?  I can up with and answer: make summery looking quilts for the seniors.

I selected nine rainbow colored squares, evened  them up to 9.5"and sewed a light background to each in half square triangles.  The top was together in a chevron pattern in no time.

My friend who lets me use her long arm was away, so I decided to give my machine another try.  I have had some success quilting small projects that had low-loft polyester craft batting.  I tried low-loft cotton this time.

I layered, basted with pins and hoped for the best.  I started in the middle and though I had a difficult time with zigzag of the chevron thing, it was working!

I pieced, quilted and bound the whole thing in less than 24-hours.  Yes, it's pretty much all I did that day, LOL!

I wash the quilts before giving because I must know how well it's going wash.  VOILA!  When I got it out of the dryer, I was pleased as punch.  The minimal puckers disappeared into those wonderful convolutions of the soft cotton batting.

I am pleased to report that I have one successful--albeit small--straight stitch quilt done at home!
And it feels good! 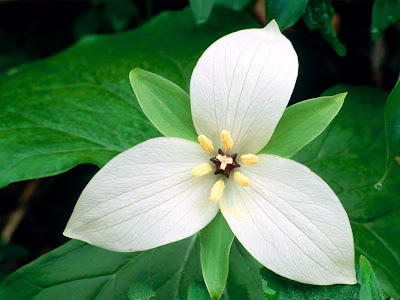 It seems like it’s only been a few days since Joanna invited me to be a part of the Forest Friends QAL and here we are at the close of it!

My forest ‘flora’ is the trillium. Here's an interesting fact about this flower: if you pick the blossom, the plant will likely die. I’ve been tempted, but never have! 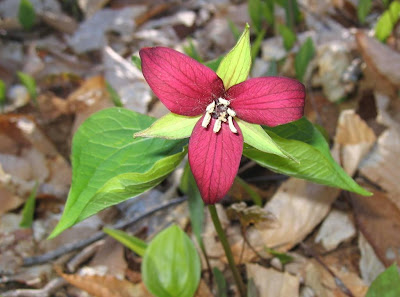 Where I live, the trillium flowers are white.  Joanna worked up the final .PDF for my design (thank you!) and represented a red flower. Maybe you will want to make yours a little differently than mine and choose red.

With the ‘puzzle’ warning, just be aware of your piece placement!

*FYI, at the end of this blog, there are links to download .PDFs of both the pattern and the instructions.


Here’s what you will need: 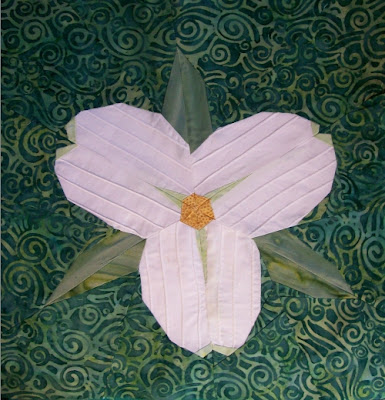 For the center, I used Dimples by Andover Fabrics which is a tone-on-tone fabric that comes in a huge array of colors. 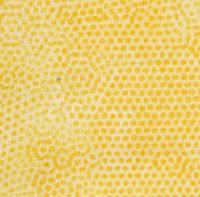 For the flower petals, I happened to have had a piece of white fabric with pin-tucks that I used as a representation of the veins of the petals--a striped fabric might work well too.  I used a dark green batik for the background to simulate the dark forest floor and a striated batik for the leaves. 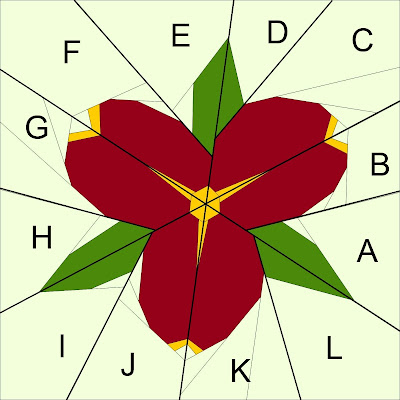 Piecing the Trillium:
Be aware that several of these pattern sections look quite similar. Double check your section letters before stitching them together!
Voila! You are finished. You can use this block to make a pillow. Add a few other designs from the Forest Friends QAL to make a wallhanging. Make all the blocks for a full-sized quilt! If you make my design (or any of the others from the Forest QAL, please share a picture of it at Flickr.

If you have trouble of any kind, please email me!

Thank you, Joanna and Julianna for hosting this fantastic Paper-piecing QAL!

I was partnered with Marilyn for the most recent round of the Flickr Mini QT swap.  "Botanical and Feathered Friends" is the theme for the current round.  Both Marilyn and are are bird lovers.  What we would make each other was a no brainer!

Here are the end results.  We also sent each other bird themed extras.  Thank you Marilyn!  FYI, the swap requires that these mini-quilts are no large 12"x12".

While I was recently hand appliqueing a piece, I thought about how much stitching keeps you in the moment.  If you aren't thinking about what you are doing right then, the next step very probably won't be what you want it to be.  I guess this is true with other processes.  Maybe this was evident because of the slow process of hand stitching.
Regardless of the lack of speed, hand applique and embroidery are my favorites.  I was not very successful at needle turn applique (edges are turned under as you sew and not left raw) until I learned of the following method.  Maybe it will be helpful for you!
I thought of sharing this while my work was in process, so you join me there...
(not pictured, sorry)
At this point, I sprayed with starch, then ironed the piece, securing and stiffening it.
You do that for each subsequent piece, as well.
THEN, I trimmed around the basted piece.  It is trimmed slightly wider than 1/8 inch.

Thanks to everyone that voted me in last week’s
Appliqué Quilts event. The guest judge awarded 25 bonus points to Virgo Mermaid, On the Rocks, Flutterbyes and Flora & Fauna.  The site owner awarded 50 points to My Grandmother's Rose of Sharon, 30 points to Africa and 20 points to Trains, Planes and Bicycles.  Flora & Fauna by Karen H. was still strides ahead, so it won.  I thought by virtue of detail, it should win.

>Even though we didn't win, thanks for your support.  It meant a lot! 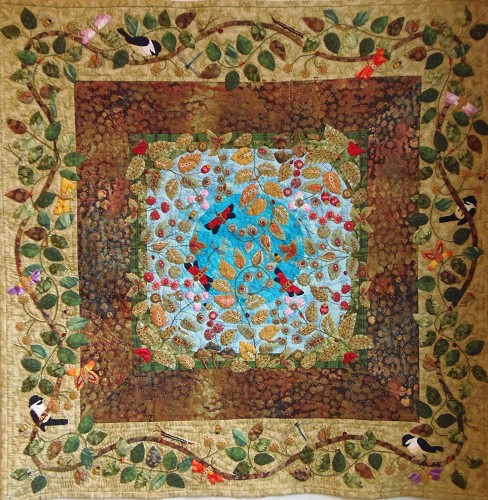 "Art enables us to find ourselves and lose ourselves at the same time." -- Thomas Merton